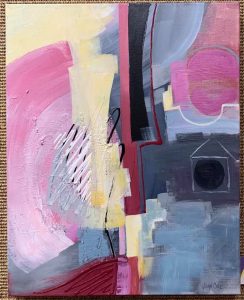 My flash fiction piece, One of the Team, was paired with art in a collaboration with The Shreveport Art Club for an exhibition at the LSUS University Center Gallery in Shreveport.

The painting is by Joan Cole.

One of the Team

Listen to One of the Team read by the author or read the story below.

His sweaty hands grasp the bat. The band of his cap itches. He ignores it and concentrates on the ball.

His eyes widen as he tracks the ball’s arc. The bat slides from his grip, the gentle landing thump lost in the rush filling his ears with each beat of his red-blooded heart.

Run to first base.

He hears nothing, sees nothing but the white triangle. No one tags him. Should he stop? His feet keep running and the rest of him follows.

A cloud of fine red dirt rises up to baptize his virgin white cross-trainers. Dust flies. So does he.

At home plate he leans over, hands on knees, panting.

All at once, the volume comes back on. The yelling is not happy.

It’s hard to tell which teammate he is. They all wear red shirts. The boy’s mouth and eyebrows are mad.

Coach comes near, saying something.

He tries to make eye contact, but the angry face pushes him away. He looks hard at Coach’s middle.

“First base is that way.” Coach points. “You should know that by now.”

The team clusters on the sideline, distancing themselves from the loser.

In his room, he sits on the floor. There is a file box in his mind where he keeps all the facts. These are today’s facts.

Fact #1 He went the wrong way.

Fact #2 First base is to the right.

Fact #3 He should know this.

When the mother finds him, he is rhythmically banging his head against the wall, repeating a mantra.

Beside him, on the floor, lies a dirty red baseball cap.