What’s a Beta Reader and Do I Need One?

This post originally appeared at Almost an Author here.

All writers need feedback. Should you use a beta reader?

What is a Beta Reader?

The majority of people define a beta reader as a test reader, a person who reads your manuscript after it has been critiqued, polished, and edited. Most writers will provide a list of questions for their beta readers. These questions ask for general feedback about character development, plot, setting, and so forth. Some writers feel it is best not to ask leading questions, while others ask readers to evaluate certain areas that they think need attention. Beta readers are generally intended to catch big picture story problems or plot holes.

Some people use beta readers as editors and proofreaders, but betas are not a substitute for editing. Betas can stray into critique as well.

There are many paid beta reading services. These might be considered a budget version of a content edit, or a first pass content edit, and seem to stick to test reading only. I had one individual offer to read my manuscript for free and she did a fair job. I provide a list of questions for my betas, but she had her own, which were similar to mine.

If you plan on using a paid beta reader, shop around. Ask for recommendations and referrals.

Ready for a Beta?

Free beta readers can be found in online groups. If you decide to take the plunge and use a beta reader, save time and aggravation. Submit the first chapter and see if they respond with appropriate and timely feedback.

It pays to be leery of beta reading offers from people who don’t read in your genre. There’s nothing like having a beta offer to read and then confess they do not like this genre right before they suggest rewriting the manuscript to please them. On the other hand, a good beta will be able to read across genres and offer constructive feedback.

I’ve gotten everything from single word answers to a full blown expository review. I always read all comments. One reader gave strange answers to the response questions, repeatedly citing an incident that wasn’t in my book. I wanted to ask if she’d been watching Netflix while beta reading. BUT, she did comment in track changes on my MS, catching several typos and a couple of crucial loose ends. Go figure.

I’ve met some amazing writers through beta reading groups. The community is generous and most try to do their best. A few people have reached out to me and helped me without asking for anything in return. I’ve met some wonderful writers who I consider to be some of my most valued critique partners and beta readers. They help me see things I wouldn’t have otherwise because I’m too close to the project. A good beta reader’s value cannot be overestimated.

My all-time favorite betas are two wonderful ladies in the UK. For some reason, the criticisms are easier to take and the encouragement makes me smile. “This part is a bit muddled” and “Brill!” just tickles my ear.

Do you use beta readers? Tell me about your experience.

My life is divided into before and after. I’m in the after now.

When I got sick, my daughter became frightened. Who wouldn’t be? It was the summer before her freshman year of high school, and she spent her vacation taking care of her mother who needed assistance walking and bathing. It didn’t matter what I told her, or how many reassurances were held out, she was terrified. All the soft gentle words and reassurances never made it past her fear wrapped worry.

Sometimes you need a story.

I wrote her a book about a girl who was afraid her mother would die and leave her alone. In the book, the mother does die. The girl is not left alone, however. She has family and unlikely heroes to depend on. I wrote my daughter a book to make her laugh and cry, but most of all to help her see she was not alone and it wasn’t up to her to save the world. I think maybe it was both comforting and uncomfortable for her to discover how much I understood her.

She’s not a character in a book, and she is not this character. But young girls everywhere get angry with their mothers, at times think they’ve been abandoned, and generally feel treated unfairly by life. They’re often surprised when they discover their mothers were once girls and understand all of these deeply held, secret feelings.

Among the pages of this made up place filled with pretend people my daughter finally understood what I was trying to tell her. She wasn’t alone.

Sometimes you need a story. 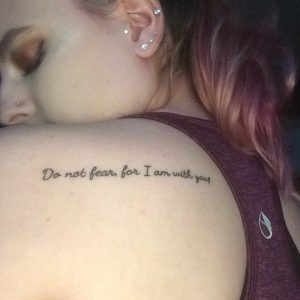 A funny thing happened. Out of the story, two more grew. Each of these novels stand alone, and while they don’t lean on each other, they do rub shoulders, exploring the lives of the various characters in the same fictional small Texas town.

It’s quite a surprise to find at the end of these eight years I have three complete novels. I’d freelanced in my former writing life, and even written a novella, which resides in the dark recesses of my computer files, but I’d never attempted a novel length work.

As my health improved and my responsibilities shifted, I had more time to write books. With each novel, I learned better and went back, refining and polishing. I hunted down critique partners and entered contests. I was quite pleased with the feedback I got. Now I’m ready to start querying agents.

I’m telling you this tale because, as with all of my stories, I want to encourage and bring hope to the reader. Because sometimes you need a story.

Donna Jo Stone writes YA contemporary novels about tough issues but always ends the stories with a note of hope.

PitMad is an opportunity for unagented authors who have complete novels. Writers pitch your novel in a tweet with appropriate hashtags. Agents search tweets for specific genres and if they like a tweet, the submission process begins.

It’s a bit unusual to have three completed novels at the same time. The drafts were all finished around the same time primarily because I dictated them while I was waiting to recover from my cipro injury before I started editing. Hiring an editor was not an option for me at the time. My typing isn’t as good as it was before I got sick, but it is passable. Currently, I’m doing my best to reduce a 93,000 word manuscript to 80,000. I’m well on my way and hope to complete the edit before the 7th. It’s a pity I can’t take all those discarded words and put them on another project.

Besides editing, I’ve been writing synopses and working on tweets. Condensing an entire novel into a single tweet can be challenging. You only get 280 characters, including spaces and hashtags. It’s an excellent exercise in being concise.

NOLASTARS/RWA is having a Spring Writing Retreat Saturday, March 9th. Check it out. If you are local and are looking for a group, it’s a great organization. See how friendly we are?

In other news, this month I begin my new position as the YA columnist over at Almost An Author. Woot! My first Almost An Author post is scheduled to go up on March 21st. I’ll share a link on the home blog right here, so come back and visit, or you can subscribe to get posts in your mailbox, or visit Almost An Author.

Do you have any topics you’d like to see me cover in the blog? Leave your comments below.

Please consider signing up for the blog and/or my newsletter to keep in the know.